What’s In a Song?…”Of the Father’s Love Begotten” 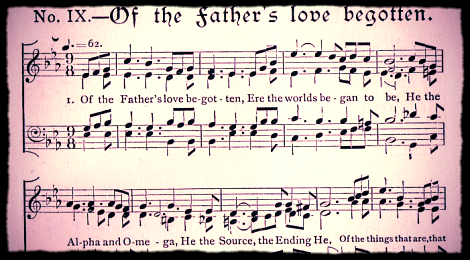 It is fascinating how we sing songs and know the tunes by heart, yet often have no concept of where they originated or the great lives and stories behind them.  The church is filled with beautiful hymns, and I believe we miss out on an incredible aspect of the Christian faith when we don’t know the history behind the tunes or the souls who were sensitive enough to the Holy Spirit to write such profound confessions.  One of the oldest hymns we sing today is often popular around Christmastime. “Of The Father’s Love Begotten” found its origin in the early 5th Century A.D. Let me tell you about the poet behind this powerful hymn.

Born into a wealthy Spanish family in the year 348 A.D, Aurelius Prudentius Clemens grew up as a man loyal to Rome, and became a lawyer.  Later he was an influential judge, and then rose in rank to become a governor and court official for the Christian Roman Emperor, Theodosius. Christian belief permeated the Roman Empire by this time, because of Emperor Constantine’s conversion in 312 A.D., and the 313 A.D. Edict of Milan, which decreed full tolerance of Christianity. Prudentius believed Rome to be an “instrument in the hands of Providence for the advancement of Christianity.” Quite a shift from the horrors of previous Roman leaders crucifying Christians and sending them to the Colosseum to be ravaged by animals!

Yet, still there were pagan ideas and heretical streams seeping into the church.  Many were compromising on the tenants of true faith for their own personal or political gain.  This was the era of men such as St. Augustine of Hippo and his contemporaries- bold voices of faith who will forever be relevant and studied in the church.

Aurelius Prudentius Clemens, at 57-years-old, left his political prowess to turn toward meditation, prayer, and poetry.  He began also writing hymns for daily monastic offices/hours.  Some may call this sudden career change today a midlife crisis, but for him, it was more of an end-of-life change, where he began to use his power and voice to influence the world on a spiritual level rather than a political one. Prudentius reflected on his sudden career change and his new intentionality toward things of the Spirit, “At the very end of life, may my sinful soul now put off her folly, and if not by deeds, at least by words give praise to God, join day to day by constant hymns, and never fail to celebrate the Lord each night in songs.”  Writing many poems during the last decade or so of his life, little did Prudentius expect one would turn into such a well-preserved hymn and be sung over 1500 years later in churches all around the world.

With his successful legal background, Prudentius had the wherewithal to use argument and fact in his poetry, to portray not just beautiful feelings, but rather a proclamation of truth so that Christians could believe and understand the Trinity. Prudentius was a man who wrote to combat the heretical voices of his day, and intentionally penned very poignant poems that promulgated sound orthodox Christian theology. One of the leading heresies of the day was taught by Arius in the 3rd and 4th centuries A.D.  There was a widespread false teaching that Jesus, though divine, was created by God and not equal to the Father.  We know clearly, if we believe Scripture to be truth, that Jesus was in fact One with God the Father, and has existed throughout all eternity.

This great mystery and wonderful reality of the Christmas story we find written of in Colossians 1:15-20:

“The Son is the image of the invisible God, the firstborn over all creation. For in Him all things were created: things in heaven and on earth, visible and invisible, whether thrones or powers or rulers or authorities; all things have been created through Him and for Him. He is before all things, and in Him all things hold together. And He is the head of the body, the church; He is the beginning and the firstborn from among the dead, so that in everything He might have the supremacy. For God was pleased to have all His fullness dwell in Him, and through Him to reconcile to Himself all things, whether things on earth or things in heaven, by making peace through His blood, shed on the cross.”

John 1:1-5 also expresses this profound truth of the divinity and eternal existence of Christ Jesus, one with God the Father and Holy Spirit, Creator of the Universe:

“In the beginning [before all time] was the Word (Christ), and the Word was with God, and the Word was God Himself. He was present originally with God. All things were made and came into existence through Him; and without Him was not even one thing made that has come into being. In Him was Life, and the Life was the Light of men.  And the Light shines on in the darkness, for the darkness has never overpowered it [put it out or absorbed it or appropriated it, and is unreceptive to it].”

Prudentius stood unashamedly upon the Word of God and wrote in his hymn of redemption only through the eternal Christ the Son.  He referred to creation and the fall, the virgin birth, Christ’s fulfillment of prophecies, and the victorious reign of the Trinity.  He affirmed that Jesus was “begotten” and not created.  His poem points to Christ as both God and King, and stomps out Arian heresy.

Prudentius , who died around 413 A.D., is revered today by hymnologist and scholars as “the first great poet of the Latin church” (Fred Gaely), and “the earliest Christian writer who was a real poet” (Albert Bailey). “Corde Natus Ex Parentis” was the Latin title for his poem which we know today as “Of the Father’s Love Begotten.”  John Mason Neale and Henry Baker translated it into English in 1851 and 1861.  It was set to the plainsong chant, Divinium Mysterium, written sometime between the 12th and 13th centuries A.D.  Below are the original nine verses.  We recorded four of them for #25CarolsofChristmas.  Be blessed by this recording and the reading of this powerful hymn!

Of the Father’s love begotten,
Ere the worlds began to be,
He is Alpha and Omega,
He the source, the ending He,
Of the things that are, that have been,
And that future years shall see,
Evermore and evermore!
At His Word the worlds were framèd;
He commanded; it was done:
Heaven and earth and depths of ocean
In their threefold order one;
All that grows beneath the shining
Of the moon and burning sun,
Evermore and evermore!
He is found in human fashion,
Death and sorrow here to know,
That the race of Adam’s children
Doomed by law to endless woe,
May not henceforth die and perish
In the dreadful gulf below,
Evermore and evermore!
O that birth forever blessèd,
When the virgin, full of grace,
By the Holy Ghost conceiving,
Bare the Saviour of our race;
And the Babe, the world’s Redeemer,
First revealed His sacred face,
evermore and evermore!
O ye heights of heaven adore Him;
Angel hosts, His praises sing;
Powers, dominions, bow before Him,
and extol our God and King!
Let no tongue on earth be silent,
Every voice in concert sing,
Evermore and evermore!
This is He Whom seers in old time
Chanted of with one accord;
Whom the voices of the prophets
Promised in their faithful word;
Now He shines, the long expected,
Let creation praise its Lord,
Evermore and evermore!
Righteous judge of souls departed,
Righteous King of them that live,
On the Father’s throne exalted
None in might with Thee may strive;
Who at last in vengeance coming
Sinners from Thy face shalt drive,
Evermore and evermore!
Thee let old men, thee let young men,
Thee let boys in chorus sing;
Matrons, virgins, little maidens,
With glad voices answering:
Let their guileless songs re-echo,
And the heart its music bring,
Evermore and evermore!
Christ, to Thee with God the Father,
And, O Holy Ghost, to Thee,
Hymn and chant with high thanksgiving,
And unwearied praises be:
Honour, glory, and dominion,
And eternal victory,
Evermore and evermore!
Sources: