Nothing but the Blood

One of the reasons I love hymns so much is the rich theology found in the lyrics. It is good, as the psalmist reminds us in Psalm 96, to sing a new song unto the Lord, but it is also good to remember the heritage from which we have come and to remember the songs of old. It is so important to stand on the unchanging, undefiled Word of God that is incorruptible and immutable—the cornerstone and bedrock of our Christian faith, rooted in everlasting truth. Truth is not the newest, latest, and greatest, buthas always been andalways will be; truth needs not to progress nor modify nor conform, but rather stands alone in it’s absolution. Jesus Himself is the Way, the Truth, and the Life (John 14:6). He is the Word that was from the very beginning (John 1:1). 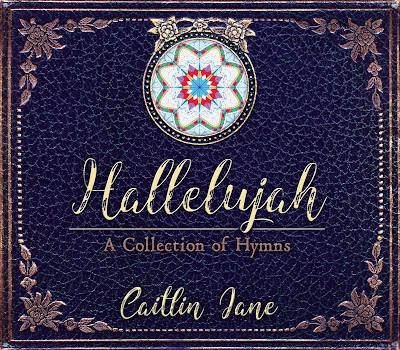 Robert Lowry’s classic hymn, “Nothing but the Blood,”written in 1876, is exemplary as it stands on the unchanging Truth of God’s Word and basic Christian theology, founded in Jesus Christ alone. This hymn, like countless hymns, is simply timeless in it’s message. It was profound when it was written, and it’s words still ring true today. In the original publication which the hymn was printed,Gospel Music(1876), the publishers, Robert Lowry and William H. Doane, put the following verse right above the song: “Without the shedding of blood there is no remission of sin” (Hebrews 9:22). It’s that simple. Our sins are stains on our souls that cannot be washed away without a perfect sacrifice—and the only perfect sacrifice is the blood of the spotless Lamb of God.
“Blood” is an interesting word that is found in many beloved hymns of the faith. With blood we often picture war and gore. And that is true here also, but this war that was won by Christ Jesus was the battle for our souls, the greatest battle in human history, and the victory is so amazing and life-giving we must sing about it! C. Michael Hawn brings up an interesting fact in his article about “Nothing but the Blood” by noting that in most hymns, when the word “blood” is used, the word “grace” could also stand in place there and be sung instead, keeping the song still true to the Gospel. Lowry was not the only hymn writer who spoke of the blood of Jesus so boldly—Wesley, among others, used this word time and again in hymns to depict the truth of Scripture and the weight of our salvation. It is because of the blood that we have grace, and it is by grace we are saved. 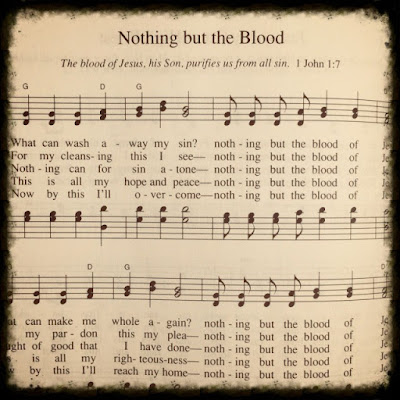 One of the beautiful aspects of this particular hymn is the call and response form in the stanzas. The multitude of questions and the continual same answer, “Nothing but the blood of Jesus,” truly force us to pause, to think, to consider the depth of what we are singing. What can wash away my sin? My guilt. My stains. My chains. My filth. My mistakes. My wrongdoings. My shortcomings. My imperfections. My regret. My condemnation. My failures. Only the precious and perfect blood of Jesus Christ, only the power of the blood of the Lamb, can take away the entirety of all the sins of the world. The blood of the Lamb is the answer to our every question, our every need, our every sin, our every longing and hope. The blood of Jesus somehow, mysteriously, perfectly, beautifully makes us whole again. It gives us hope and life and peace. It allows us one day in the near future to go home, where we will be free of sin and death and we will come fully alive and be with our Savior forever. Like many gospel songs, Heaven is the destination and the goal here, the final peak of complete hope and the promise of that to which we look forward.
So many of the world’s religions and philosophies embrace the general idea that humans must give their greatest efforts in this life, and if those efforts are good enough, then the reward of afterlife will be theirs. So most people go around comparing themselves with others, thinking, “Well, I’m better than he is or she is, so I must be good enough, right?” But the truth is, none of us is good enough, no one, ever, because the standard isn’t other sinful people, but rather the standard is a perfect, holy God, in whose presence we do not deserve to stand. It’s impossible to come before His throne in our imperfections and iniquities. So God made a way—divinity took on flesh, He came down for us, met us in our muck and mire, and in His perfection, shed His blood as the sacrifice for us to be cleansed and made completely whole and holy by His love. Wow. The greatest love story ever told is the story of our Savior and the greatest gift ever given was the shedding of His blood, by His grace.
So who was the man behind “Nothing but the Blood?” Robert Lowry was his name, and he wrote both the words and the original music to the song. Lowry was one of those men in history who was faithful, steadfast, and authentic in his faith. He lived a life that honored the Lord, and it seems that although he was quite talented and intelligent, he was humble and always worked to serve the Lord Jesus. While he had no formal music training, he sat at his organ at home every Sunday evening and wrote hymns. (I’m thinking I may adopt this habit! I have been, of late, devoting myself with more intention to keeping the Sabbath holy, focusing on the Lord, family, and rest. But how beautiful would it be to just set aside Sunday evenings for simple worship and songwriting for His glory?) 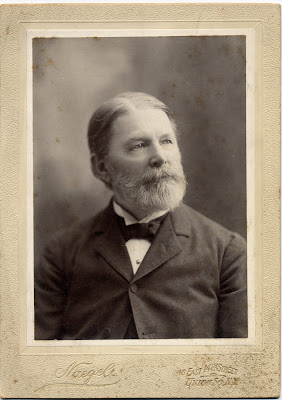 Lowry was born in Philadelphia, PA in 1826. At age 17 hebecame a member at the First Baptist Church of Philadelphia and began serving in the Sunday School ministry there. At age 22 he enrolled in Lewisberg University (known as Bucknell University today). As a Baptist minister, he pastored churches in West Chester, PA, Bloomingdale, NY, Brooklyn, NY, Lewisberg, PA (where he was also professor of Rhetoric at Lewisburg University and later Chancellor), and Plainfield, NJ. He was known for being an excellent speaker, inspiring audiences with his great enthusiasm and oratory skills. Along with editing many hymn collections in the 1860s and 1870s (Gospel Melodies, Bright Jewels, and Pure Gold), he also wrote tunes to go along with song written by other famous hymn lyric writers, such as Fanny Crosby. His “melodies and songs were but the expression of the man’s heart and his character, and they attracted all men to him,” stated Lowry’s eulogy, written by an unknown man who went by “H.”
A fascinating fact about Robert Lowry has me marveling. It has nothing to do with his ministry or the vast sum of hymns he wrote, except for the fact that this man used his brilliant mind and musical ability to the highest standard, with only the sky as the limit. During his time as editor for the various hymn collections, he tried to reduce music to a mathematical basis. Because Middle C has 256 vibrations per second, Lowry formed a scale and attempted to work off the number three. He made countless attempts experimenting with calculations, until he finally concluded his theory did not work. Honestly, this is all above my head—way above my head! I’ve never been good at theory or at reading music, so this just impresses me so that this man would take music and math that far! 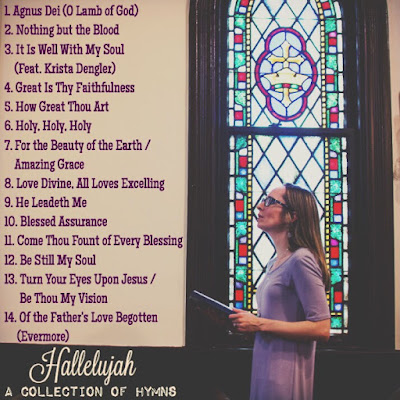 I wanted the song “Nothing but the Blood” to be first on my Hallelujah: A Collection of Hymns album, after the Gregorian chant intro, “Agnus Dei,” because I wanted the album to start off literally on the right note. And that note is to confess that we are sinners in need of a Savior. I am a sinner, very much in need of a Savior. I desperately need grace. My longing is for this album not to be about me, but rather be about my Savior, Jesus, and to tell the story of the cross and the resurrection and the only hope that can anchor our souls. I am reminded continually of how much I sin, in what I’ve done and left undone, in what I think and what I say. But I am also reminded continually of what Christ has done on my behalf, and that His blood speaks a better word (Hebrews 12:24). Because this great hymn is so theologically rich, I decided to write a new tune that would wake up our hearts to the fullness of the lyrics and the message. Sometimes we sing hymns over and over and we forget the profound message behind them. Something fresh and new musically can often remind us of the depth of unchanging truth lyrically.I still love the old tune that Lowry wrote, and I hope this new tune I wrote honors him as the original hymn writer. The new tune I composed is a more haunting melody that really paints a musical picture of the mystery and power of the blood. I hope that it resonates with your heart, my friend, when you hear it and sing along.
Let us meditate on the beauty of these Scripture passages below and celebrate the saving grace we have received through our Savior’s blood.
“…having now been justified by His blood,
we shall be saved from wrath through Him.”
(Romans 5:9)
“Likewise He also took the cup after supper, saying,
‘This cup is the new covenant in My blood, which is shed for you.’”
(Luke 22:20)
“Knowing that you were not redeemed with corruptible things,
like silver or gold…but with the precious blood of Christ,
as of a lamb without blemish and without spot.”
(1 Peter 1:18-19)
“But if we walk in the light as He is in the light,
we have fellowship with one another,
and the blood of Jesus Christ His Son cleanses us from all sin.”
(I John 1:7)
“And they overcame him by the blood of the Lamb,
and by the word of their testimony…”
(Revelation 12:11)
“In Him we have redemption through His blood,
the forgiveness of sins,
according to the riches of His grace.”
(Ephesians 1:7)

NOTHING BUT THE BLOOD

Oh! precious is the flow
That makes me white as snow;
No other fount I know,
Nothing but the blood of Jesus.