November 2011…in the middle of a season, seemingly with no hope, I penned “Anthem of Hope,” as my heart’s cry to believe in a God of Hope- the One Whom we cannot see, but Who keeps this spinning earth on axis and our fragile, fragmented hearts from breaking altogether.

November 2012…back to the studio for the first time since the Coming Season project (Morningstar’s brand new studio!) to record “Anthem of Hope”.

February 2013…in my cousin’s back yard on a cold winter night, we attempt to capture the image of a sparkler in the sky, like the ones of many happy memories during warm summer nights!

The story behind the song…

In John 20:29, Jesus tells Thomas, “Because you have seen me, you have believed; blessed are those who have not seen and yet have believed!” Have you been through a season where you feel that if one more thing comes at you, you’ll just break completely?  Someone you love is dying, someone else you love is suffering, your days are filled with pain from dawn until dusk, but you have to keep going, keep pressing on, because there’s no quitting now.  Desperate people, desperate times, desperate souls…yours being one of them.  I found myself in that very type of strange, dark, and lonely season over a year ago.  Every day seemed to throw at me a new type of pain, a new discovery of the raw war we are engaged in, hour by hour, on this broken earth. Yet in the middle of the fiercest battles I was facing, somehow the love of God descended upon me like the sweetest grace I’ve ever known, and my heart was beating to a rhythm of hope that would not cave into despair. Believe me, I wanted to despair.  But because of the faith I had placed in Jesus years before, and the gnarly roots that have threaded their way deep down into the soil of His unending love, there was a whisper of hope in my soul that would not waver.  And that is what birthed “Anthem of Hope”.  Hebrews 6:19 promises us, “Now, we have this hope as a sure and steadfast anchor of the soul. It cannot slip and it cannot break down under whoever steps out upon it- a hope that reaches farther and enters into the very certainty of the Presence within the veil.”  Now that is a hope to sing about!  That is the hope that I want to become my undying anthem, lifelong until I see face to face my Jesus.

The story behind the nylon-string-guitar…

Last July I sang at a local songwriters night, which was a lovely event, charming atmosphere, with some wonderful people.  During the sound check, this guitarist started jamming to my songs as I did vocal and piano checks.  The sound guy was like, “Do you want him playing?  I can stop him…”  I laughed and said, “NO! Please keep playing!  In fact, you can play on any of my songs tonight!”  This musician’s ear was so good, that he could pick up on any of my songs immediately, without ever hearing them before.  He ended up playing with me that night.  I told my mom that night, ” ‘Anthem of Hope’- that’s the next song I need to record, and it needs to be with that guitarist, Dave.”  He left and I didn’t even catch his last name, so it was probably a few weeks later when I finally tracked him down after lots of email traffic with others and emailing one or two wrong “Daves” out there!  The first concert Dave Booze played with me was when I opened for Todd Agnew in August.  One of the last things Todd said to me that evening as we closed down the place and packed up our things was, “You need to record that new song, ‘Anthem of Hope’.”  Funny thing…artists tend to have similar ears for these things 🙂 And so we did…and it was such a joy to see Dave’s talent at work in the studio.  It was a blessing to be back recording, even for just a single song…This was my first time ever recording one of my songs that wasn’t piano-driven and strictly guitar based…I hope you like the new sound!

The story behind the unique cover art…

Many of my happiest childhood memories go back to an old town in Maine where my family has vacationed every summer.  There were many a night when my cousins and I would run through the streets with sparklers, or other enchanting things like tricycles, dogs, ropes, and flashlights…There was one very special memory on a particular night, my last night before leaving one summer.  I was sworn to secrecy of what took place, so I won’t divulge the details, but our childhood imaginations emerged in a delightful scene, with laughter, light, and believing in what we could not see. It could have been a sour evening when disappointment tried to ruin our plans, but we chose joy instead, and with blind eyes like little babes, we had faith that didn’t lean on sight.  It was magical what unfolded, and I’ll never forget our glee as we ran through the street.  Sparklers may or may not have been involved 😉 Maybe you can recall one of those extraordinary, imaginary moments as a child, when all the darkness of the world could not put out your little match of flickering hope! So this is what I picture every time I sing “Anthem of Hope”…in a world crashing with despair and danger, GOD’s love comes crashing down with the marvelous light of hope- hope which only a child can truly grasp. Luke 18:17, “Truly I tell you, whoever does not receive the kingdom of God as a little child will never enter it.”

So that was precisely the vision I wanted to portray in the cover art.  I knew just the person to call!  Another dear cousin of mine, Sophia Elliott! She’s an extraordinarily talented photographer, who has captured pictures home and abroad that are phenomenal…from the tiniest dew drop after a rain, to the misty mountains of Vietnam, this girl has an eye.  She has a knack for something known as “light painting” in the photography world.  I can’t explain it- she could give you the ins and outs of the shudder speed and how it all works, but through this technique, she was able to capture me literally writing in the sky, the words “Anthem of Hope”!  She coached me through the process, telling me how to write the letters (I had to write them backwards, mirrored-like, since I was behind the sparkler, so that it turned out “Anthem” and not “mehtnA.” Time was of the essence, as the sparkler would run out quickly!  My little fingers were freezing, and then the hot sparkler that burned one finger added to the numbness and pain!  It was quite a process.  She worked her camera magic, and I kept writing in the sky.  Somehow after a few takes…a dozen or two sparklers, we got it!  I’m still amazed it actually came out.  Sophie is one talented young lady, willing to brave a cold night and watch me fumble through the dark with sparklers.  Her joyful, keep-going spirit made it feel like a lovely summer night! Definitely check out more of her beautiful photography online.  And here is the album artwork for this new single…I think it’s pretty cool, what do you think?!  I look at it and get a big smile on my face, remembering those summer nights as a child, playing with sparklers and brimming with hope. 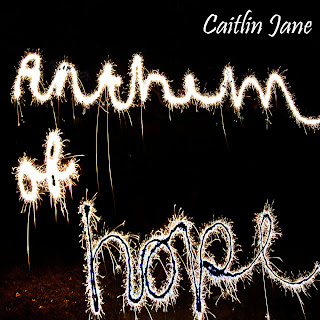 “Anthem of Hope” is NOW available on CDBaby!
Enjoy!  ﻿