It was July of 2015.  Jamie was finishing his first round of chemotherapy, starting to feel the wind knocked out of him as his strength was waning.  His brother and 1 ½ year old nephew came up from Arkansas for a visit, which was a big boost to his morale and strength. Then, later in the week, his sister-in-law and their two girls traveled to meet up with us in Delaware, too. I was slowly but surely meeting each of his family members over time during our engagement…with many of them at a distance. I met his two little nieces, blonde haired girls with twinkles and fiery joy in their eyes. The two of them stood in my parent’s living room and sweetly sang for us. Their soft, high voices soared as they sang an old hymn. It was one I wasn’t as familiar with, but it became one of my favorite hymns instantly, in that holy moment. Their angelic, young voices were so innocent, so filled with peace and beauty as they sang out “He leadeth me, O blessed thought…” 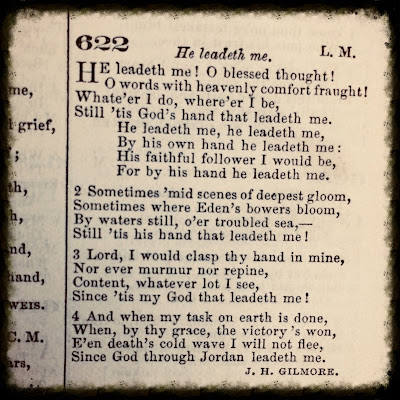 It was during a time when it seemed like we couldn’t see even one step in front of us, let alone 6 weeks ahead, when it would be our wedding day. The year had hit us with the reality of difficulties, great unknown, plans thwarted, and pain, yet it had also sent a clash of unbelievable joy and ever deepening faith, our love story unfolding amidst a reckless trust in the Lord like we’d never known before. What an incredible reminder this song, “He Leadeth Me,” was—to trust in our Heavenly Father, who leads us beside quiet waters and in paths of righteousness for His Name’s sake. He Whose Word is a lamp unto our feet and a light unto our path, His gentle, yet strong hand leads us faithfully to the end. That good work which He began in us, He will bring to completion on the day of Christ Jesus. Oh the glorious promises, packed with power, from His Holy Word! What comfort it was, and still is, to know that He has a plan beyond what we can see here and now, and that He is faithful to complete that which He started in our lives—the Author and Finisher of our faith.
The Holy Spirit spoke comfort, courage, and compassion to my soul on that hot summer day when the girls sang for us. I will never forget that moment in our journey—it was as if time stood still and for a few seconds, God just held us close and gifted us with beauty and joy in the voices of children. So simple; so significant.
Fast forward with me 2 ½ years later, to early 2018 when I was picking songs for the Hallelujahalbum. It wasn’t even much of a question whether this song should be on the album—it is a part of Jamie’s and my story, a part of our faith strengthening. However, I knew I couldn’t sing this song alone, but I needed some very special girls to sing on the album with me. Through some crazy juggling of schedules and reserving of studio time, and a few adults jumping through hoops, we got our two nieces to fly up from Arkansas with their dad. We drove up from Virginia, and one of my nieces from Delaware joined us for the day. All of us spent April 14that MorningStar Studios, just 23 miles away from First Baptist Church and a home down the road in Philadelphia, where Joseph Gilmore penned the words to this hymn 156 years prior. Incredible. 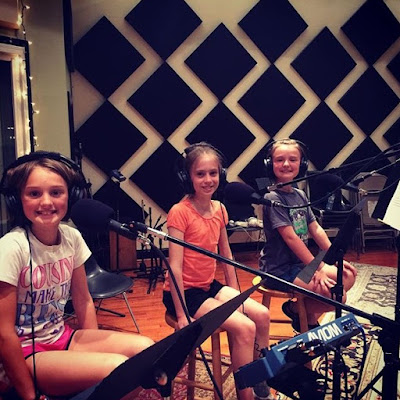 Leah, Campbell, and Mary Ann walked into the studio, each one with such humble confidence. They wore smiles all day, and couldn’t help but giggle and chatter between singing. They sat on their stools, headphones on, microphones in front of them, and their young voices resounded with glory only Heaven could surpass. What an honor to have three of my nieces join me on this recording journey, and have their voices recorded on this album, singing praise to our Heavenly Father, who leads us on His good and faithful path. It was one of the happiest days ever for all of us! They absolutely nailed their part of the song, recorded a few takes for layering, and then got to explore the studio and how the soundboard works, while Glenn showed them tricks and buttons and how he does the engineering for the songs! We celebrated with barbecue and brownies. 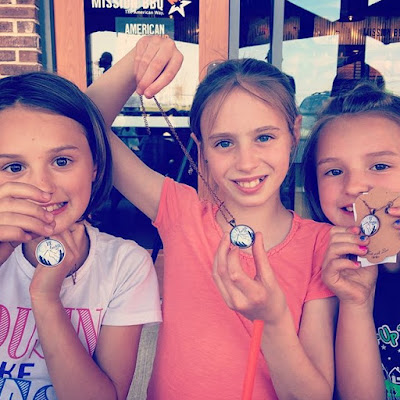 I gifted the girls these sweet necklaces from The Thankful Sparrow as a reminder that forever and always, He leads us. Through mountains, through valleys, through storms, through sunshine, through pain, through joy, through suffering, through glory, our Good Shepherd leads us. 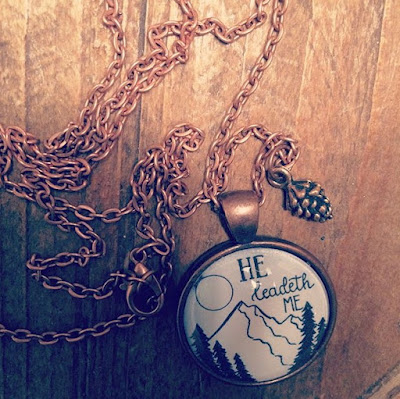 Let’s travel back now to 1862, at a time during our nation’s history that was filled with difficulties, great unknown, plans thwarted, and pain. War had broken out between the North and South. Brother was fighting against brother, father against son, neighbor against neighbor. Friends and family members had turned into foes, and the trauma and loss was unimaginable. It was a deep, dark time in history, yet light seems to shine ever brighter during the darkest nights. A young pastor, only 28-years-old, was asked to preach at the First Baptist Church of Philadelphia on March 26th,during their mid-week service. Joseph Henry Gilmore recalled, “I set out to give the people an exposition of the Twenty-Third Psalm. I had given this exposition on three or four other occasions; but this time I did not get beyond the words ‘He leadeth me.’ So greatly impressed was I with the blessedness of divine guidance that I made this my theme. It was the darkest hour of the Civil War. I did not refer to that fact—that is, I don’t think I did—but it may subconsciously have led me to realize that God’s leadership is the one significant fact in human experience, that it makes no difference how we are led, or whither we are led, so long as we are sure God is leading us.”
After the service, Gilmore went to the home of a deacon. He recollected, “There we continued our discussion of divine guidance. While I was still talking and listening, I wrote on a piece of my exposition manuscript the words to this hymn. I handed the paper to my wife and more or less forgot the incident.” It wasn’t until three years later, when he was invited to preach at the Second Baptist Church in Rochester, where he would later become lead pastor after his time leading a congregation in New Hampshire, that he stumbled upon the greatest of surprises.
Gilmore wrote, “I picked up a church hymnal to see what songs they sang and was surprised to have the book fall open to the very song I had written three years earlier.  When I returned home, I related this experience to my wife. ‘I do not understand it,’ I said. ‘My words had been set to music by Dr. William B. Bradbury; yet I had not given the words to anybody.’ My wife smiled and said, ‘I can explain it, Joseph. I felt that the words would bless the hearts of people in these troublesome times; so I sent the poem to The Watchman and Reflector. I am glad to know that they have printed it.'” 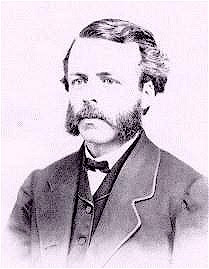 Gilmore went on to be a professor of Hebrew, logic, and English literature at Rochester Theological Seminary after pastoring churches in Pennsylvania, New Hampshire, and New York. However, he is best remembered for his beloved hymn.


The Lord is my Shepherd;
I shall not want.
He taketh me to lie down in green pastures:
He leadeth me beside the sill waters.
He restoreth my soul:
He leadeth me in paths of righteousness for His name’s sake.
Yea, though I walk through the valley of the shadow of death,
I will fear no evil:
For Thou art with me;
Thy rod and Thy staff they comfort me.
Thou preparest a table before me in the presence of mine enemies:
Thou anoints my head with oil;
My cup runneth over.
Surely goodness and mercy shall follow me all the days of my life;
And I will dwell in the house of the Lord forever.
(Psalm 23)
HE LEADETH ME
He leadeth me! O blessed thought
O words with heav’nly comfort fraught;
What e’er I do, where e’er I be,
Still ’tis God’s hand that leadeth me.
Sometimes ’mid scenes of deepest gloom,
Sometimes where Eden’s bowers bloom,
By waters calm, o’er troubled sea,
Still ’tis His hand that leadeth me.
Lord, I would clasp Thy hand in mine,
Nor ever murmur nor repine;
Content what-e’er my lot may be
Since tis My God who leadeth me
And when my task on earth is done,
When, by Thy grace, the victory’s won,
E’en death’s cold wave I will not flee,
Since God thro’ Jordan leadeth me!
He leadeth me! He leadeth me!
By His own hand He leadeth me;
His faithful follower I would be,
For by His hand He leadeth me.
Sources:
Graves, Dan. “Joseph Gilmore’s Memorable Hymn.” https://www.christianity.com/church/church-history/timeline/1901-2000/joseph-gilmores-memorable-hymn-11630718.html
Morgan, Robert J. Then Sings My Soul. Nashville: Thomas Nelson Inc., 2003.
Hawn, Michael C.  “History of Hymns: ‘He Leadeth Me: O Blessed Thought.’”https://www.umcdiscipleship.org/resources/history-of-hymns-he-leadeth-me-o-blessed-thought