For the Beauty of the Earth / Amazing Grace 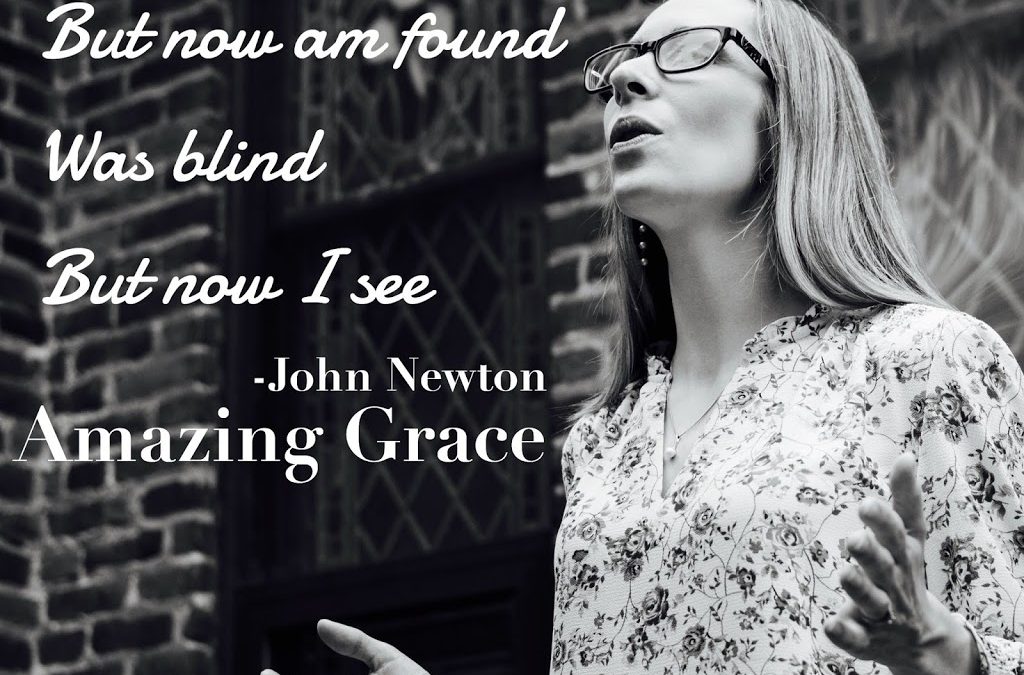 In picking hymns for the Hallelujah album, I had a dilemma before me. While I know that “Amazing Grace” may very well be the most well-known and best-loved hymn of all-time, I also know that sometimes when songs are overdone, we seem to lose sight of the profound meaning and message behind them. So I was torn- I didn’t want to just be trite in throwing this hymn on the album because it would be expected. I, too, treasure this song, though, and the story behind it, so I knew that if I didn’t include it, something would be amiss. I still had no inspiration on how to arrange it or make it special, because a song like “Amazing Grace” deserves something special indeed. So I waited on it, and just wasn’t sure how to go about including it.

One day when I was singing “For the Beauty of the Earth” at the piano, suddenly I found my fingers playing the tune to “Amazing Grace” as an interlude between verses. It felt so right! So fitting! I played it for Jamie (I always test my songwriting and arrangements with him) and he approved, so that was it! I was excited about this subtle, different way to include such an exceptional hymn.

While the hymn, “Amazing Grace,” is treasured by folks around the world, the story behind this hymn, I daresay, is just as noteworthy…British sailors in the 1700s were a rough lot, but John Newton was even shocking to some of his comrades at sea in his vulgar language, debauchery, and heathen living. Not only did he have such a reprehensible lifestyle, but he was also a slave trader at that, responsible for the chains (as well as the death) of countless human beings.

In his early years, he grew up in a home where Christ was Lord, and his mother was a praying woman (I love seeing that theme throughout the stories of hymn-writers…I think of Robert Robinson who wrote “Come Thou Fount of Every Blessing” and how his mother had bold prayers and dreams for his life…As a mother myself, I am well aware of the importance of praying over my children’s lives, that they will follow Christ one day and live wholeheartedly for His glory). Newton’s mother died when he was only seven years old, but in those short years, she taught him the Scriptures as well as Isaac Watts’ hymns in Divine Songs for Children. (Watts was another prolific hymn-writer. One of my only regrets with this album is that I didn’t have room to include one of Watts’ hymns!) After she died, young John went to boarding school, and then to sea, and back and forth…He joined the navy under pressure, then deserted. After he was captured, he was flogged terribly. He was a depressed young man with no direction, having ideations of suicide and murder. He found himself then on a slave ship, and at one point was even captain of a ship, as well as managing a slave warehouse.

In the middle of a raging storm at sea on March 10th, 1748, when Newton and the crew for sure thought they would soon drown, he began to cry out to God. The Scriptures and songs of worship that his mother taught him as a boy came immediately to the rough sailor’s mind. His ship, the Greyhound, was being tossed and thrown by the crashing waves and fierce winds. He suddenly thought of Proverbs 1:24-31. He shortly thereafter found a New Testament as well as a copy of The Imitation of Christ by Thomas à Kempis. He read both, and focused in on Luke 11:13, as he began to fear God for the first time in his life. Later, he recalled, “That tenth of March is a day much remembered by me; and I have never suffered it to pass unnoticed since the year 1748- the Lord came from on high and delivered me out of deep waters.”

It was most definitely the grace of Jesus Christ that saved John Newton from his life of sin and from his peril at sea. He continued sailing and in the slave trade, but not for too long, as his life was being changed inside out, slowly but surely. He began rigorously studying the Bible and praying at sea. Eventually he left the slave-trade and became a tide surveyor in Liverpool. That didn’t last long, as his mother’s prayers were being answered! At 39 years of age, in the year 1764, he became an ordained minister in the Church of England and entered into the ministry as a preacher in the small town of Olney. His great passion was to share the gospel, and thus he did for the next 43 years of his life. For Sunday evening services, Newton had a habit of composing hymns to go along with his Scripture lesson. He gave a message on New Year’s Day in 1773 on David’s prayer in 1 Chronicles 17:16-17, which inspired a hymn entitled “Faith’s Review and Expectation.” In 1779, the hymn “Faith’s Review and Expectation,” along with 279 other hymns by Newton and many hymns by William Cowper (Newton’s parishioner and good friend who wrote “There is a Fountain Filled with Blood” among other famous hymns) were published in the Olney Hymns. Today, we know “Faith’s Review and Expectation” as simply “Amazing Grace.” The same year that his hymns were published, Newton left Olney and moved to London where he became rector at St. Mary Woolnoth. His ministry was broad, spanning the classes of extreme poor in the city, the merchant class, and the wealthy. He formed a friendship with a young man named William Wilberforce. Wilberforce was a member of Parliament and doing much behind the scenes (as well as out in the open) to work toward the abolition of slavery. Wilberforce looked up to Newton in his teaching of Scripture and dedication to ministry. Newton had a wealth of knowledge about the slave trade from his experience and this was vital in helping Wilberforce’s mission, eventually leading to the end of the slave trade in Great Brittain.

John Newton had a beautiful relationship with his wife, Mary, filled with love and romance and most of all, deep commitment. He lived until he was 82 and preached until he no longer could due to failing eye sight and poor health (it is amazing how many of our favorite hymn writers were blind or close to it…I am deeply encouraged by their faith even when their eyes could not see!) Newton is remembered for saying, “My memory is nearly gone; but I remember two things: That I am a great sinner, and that Christ is a great Savior!” Amazing Grace began sweeping across America during the Second Great Awakening in the early 1800s. Christians used this hymn in outdoor revival meetings, probably set to a variety of different tunes. What is so interesting, and by no coincidence, but surely providence, is that this song was sung by many slaves, with such a powerful message of freedom. And it also made its way into the Civil Rights movement. A former slave trader, converted to Christ, who himself found such amazing grace in his own life, wrote a song that slaves later could hold onto with hope for eternity to come, for seeing Jesus, for freedom, for life…Even Harriet Beecher Stowe, American abolitionist and author, and daughter of a revival preacher, included the hymn in Uncle Tom’s Cabin in 1852.

1835 was the year the words to Amazing Grace were first put to the tune NEW BRITAIN that we now all know. It was also the year that Folliott Sandford Pierpoint was born. His birthday was October 7th to be exact, and he was born in Bath, England. Quite a scholar, he graduated from Cambridge and then taught the classics at Somersetshire College in Bath. At the age of only 29, he was walking through the countryside on a gorgeous spring day. He was so in awe of the creation around him, he couldn’t help but write a poem. (As a songwriter, I identify so well with that feeling. Certain scenes of beautiful creation just seem to overwhelm my being to the point that I cannot help but put down in words all that I feel, all that inspires me! At least for me, the most meaningful songs seem to be written when the Holy Spirit sparks creative passion through sudden inspiration rather than laboring for hours over ideas, words, and tunes.) Bath is an area with incredible natural beauty with it’s rolling hills, green landscape everywhere, hot springs, the Avon River, and spas which the Romans built throughout the countryside. Pierpoint was overcome with a sense of awe and worship as he looked upon the glorious scene there before him that day. The hymn he wrote is what we now know as “For the Beauty of the Earth,” and it paints a picture of not only creation’s splendor, but also the incredible gifts of family, friends, the Church (the body of Christ), and Jesus our One and only Savior Divine. It was intended as a Communion hymn in the Anglican Church, pointing to the theology of the Lord’s Supper as we share in Christ’s sacrifice. Most know the refrain today as: “Lord of all, to Thee we raise, this our hymn of grateful praise.” However, the original refrain written by Pierpoint in 1835 was actually, “Christ our God to Thee we raise, this our sacrifice of praise.” I love the original lyrics, and believe Pierpoint was very specific in shining light on the glorious reality of the divinity of Jesus Christ. So often in our world today, religion gets so generic and beliefs are muddled together without a firm foundation on Biblical truth. We can treasure the great hymns of the faith because they have passed down to us so many reminders of absolute, unchanging truth. The cornerstone of that truth is Jesus Christ, both God and man, who was the perfect sacrifice on the cross for our wretched sins, who gave His life as a ransom for many and redeemed us by His blood. He overcame the grave so we can have life with Him everlasting. This is the Gospel. This is the grace that Newton wrote and sang about. This is the truth that Pierpoint wanted to lift high in praise. “For Thyself, best gift Divine, to the world so freely given…” “For the Beauty of the Earth” is one of the rare hymns devoted solely to giving thanks (which has made it strongly associated with the Thanksgiving holiday in the United States). We cannot think upon the extravagant grace of our God and Savior, Jesus Christ, without lifting our hearts and voices in thanks, so in that way, these two hymns also go hand-in-hand, seamlessly sharing a powerful gospel message of just that- grace poured out by the the Lord and thanks offered up in sacrifice by His children.

Amazing Grace! How sweet the song
That saved a wretch, like me!
I once was lost, but now am found,
Was blind, but now I see.
‘Twas grace that taught my heart to fear,
And grace my fears relieved;
How precious did that grace appear
The hour I first believed!
The Lord has promised good to me,
His word my hope secures;
He will my shield and portion be
As long as life endures.
The earth shall soon dissolve like snow,
The sun forbear to shine;
But God, Who called me here below,
Shall be forever mine.
When we’ve been there ten thousand years,
Bright shining as the sun,
We’ve no less days to sing God’s praise
Than when we first begun.

For the joy of human love
Brother, sister, parent, child
Friends on earth and friends above
For all gentle thoughts and mild


Hawn, C. Michael. “History of Hymns: “For the Beauty of the Earth” https://www.umcdiscipleship.org/resources/history-of-hymns-for-the-beauty-of-the-earth