Matthew 2 recounts the heart-wrenching story of Herod’s massacre of the baby boys in Bethlehem…Our King Jesus escaped by God’s sovereign hand through an angel’s warning in the night to his parents. Voices were heard throughout the land. Yes, crying voices were heard…countless mothers’ voices weeping for the loss of their babes, and they could not be comforted from the excruciating pain of their souls.

Imagine the scene. Absolutely horrifying. Christmas is a time for cheer and beauty, wonder and miracles…but there is also a place and time for us to soberly reflect on the pain and the horror surrounding the Christmas story. The setting was not all peace- no, not at all. Yet, the Prince of Peace entered in, His healing light piercing the blood-stained darkness. His blood one day to be shed for us all so we can be rescued and made well.  A Savior was born- to save them all- to save us all from our sins, our slayings, our sufferings.

Then Herod, when he saw that he was deceived by the wise men, was exceedingly angry; and he sent forth and put to death all the male children who were in Bethlehem and in all its districts, from two years old and under, according to the time when he had determined from the wise men. Then was fulfilled what was spoken by Jeremiah the prophet, saying:

‘A voice was heard in Ramah,
Lamentation, weeping, and great mourning,
Rachel weeping for her children,
Refusing to be comforted,
Because they are no more.'” 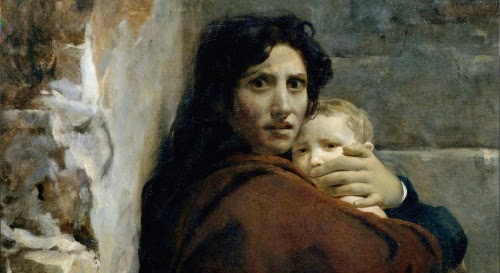 Killing of Innocents by Herod (oil painting by Leon Cogniet, 1824)
As I read this passage now, I am overcome with lament.  I think of mothers losing their children and the incredible suffering and pain their hearts endure.  I think of the horrifying news I woke up to this morning, finding out that 132 innocent children in Pakistan were shot to death by Taliban terrorists.  (Yes, these unspeakable atrocities still occur on a daily basis in our world today).  I think back to over 2000 years ago and imagine a whole region where every tiny boy was taken by the murderous hand of a king, and it is too much to bear.  It makes me think back to the days of Moses, when he was delivered by God’s providence, to then deliver his people…yet all the boys surrounding him at the time of his birth were killed by Pharoah’s decree.  Now the great Deliverer of all time had come, yet in His vulnerable infancy, He had to be delivered to Egypt so His life would be spared.  Then one day He would willingly go to the cross and lay His life down to pay for the souls so wrought with iniquity and for this world so wrought with evil.
I read this passage and I want to sit with Rachel and hold her and just weep with her.  There have been Rachels throughout the ages who have felt this type of devastating, crippling loss…Any mother who has ever lost her son or daughter knows the depths of this pain.  The Rachels I want to reach out to today are those who have endured the loss of their children through the tragedy of abortion…55 million of these babes have been lost…who knows how many mothers that is.  Some have lost more than one child…maybe two or three or four to this overwhelming holocaust of infants.  These are women who have been lied to, who felt desperate, alone, and caught in a situation with seemingly no answers and no hope, so they did what they thought was their choice; but really they felt deep down they had no choice except to end it- to stop this little life from growing.
These mothers have arms empty this Christmas and hearts aching…but so many ache silently, still alone and afraid to speak of the pain.  It is you, dear Rachels, to whom I want to reach out and love. It is for you and your children that our Deliverer has come.  His love for you is profound and as vast as the ocean wide, higher than the heavens.  Jesus is holding your precious babe this Christmas.  The King of Kings has welcomed the little ones into His Kingdom, and now, right now at this very moment, He wants to welcome you and your heart into His heart.  He wants you to know the mercy and life that He came to give. That is what Christmas is all about. He desires your healing and your wholeness. He knows your story and your fears and your shame and your longings better than you even know yourself.  Come to King Jesus and weep at His feet. He will lift you and carry you into a freedom greater than you ever knew possible.  Let this Christmas be the Christmas where you step into deliverance and the absolution of His love.
If you are one of those Rachels, please do this one thing if you do anything in the new year- go to a Rachel’s Vineyard retreat.  I have had countless friends take this step to healing, and each one has had miracle experiences of meeting Jesus’ love in a whole new way.  Do not delay your deliverance one more day…visit this website or call this number and walk into the welcome arms of your Heavenly Father who has compassion over you.  Your weeping will remain for a night, dear Rachel, but joy comes in the morning.  Your mourning can be comforted…your morning has come.

We recorded the “Coventry Carol” in memorial of King Herod’s tragic Massacre of the Innocents over 2000 years ago in Bethlehem.  This English carol was part of a traditional English mystery play, “The Pageant of the Shearmen and Tailors,” which was a reenactment of Matthew 2.  These mystery plays were pageant cycles where commoners would act out dramatic presentations of Biblical stories.  The “Coventry Carol” is a lullaby sung by Rachel, mourning for her baby.  It is not certain whether Robert Croo was the original songwriter, but his version was written in 1534.  The tune dates back to at least 1591.
“Coventry Carol”
Lully, lulla, thou little tiny child
By by, lully, lullay
Lully, lulla, thou little tiny child
By by, lully, lullay
O sisters too, how may we do
For to preserve this day
This poor youngling for whom we do sing
By by, lully lullay
Herod, the king in his raging
Charged he hath this day
His men of might in his own sight,
All young children to slay
That woe is me, poor child for thee!
And ever morn and day,
For thy parting, neither say nor sing
By by, lully lullay!